Utah is a vast and spectacular state, and home to Mother Nature’s bounty, with a landscape to suit every outdoor pursuit. The majestic Oquirrh and Wasatch mountains offer “the greatest snow on Earth”, with 14 world-renowned ski parks scattered across the ranges, including Park City’s Olympic Ski Park. Antelope Island is teeming with magnificent beasts, including bison, and people travel far and wide to check their bucket lists with ‘The Mighty Five’ national parks at Zion, Arches, Bryce Canyon, Capitol Reef and Canyonlands. It’d be highly remiss to overlook our almighty landmark – the vast and buoyant Great Salt Lake!

Now that Spring has finally sprung, Muve Group’s roving design duo of photographer, Colton and his gal and web extraordinaire, Ellyx ventured south last weekend to explore the breathtaking landscape that so many of us are fortunate to call ‘home’. Colton and Ellyx basked in the warmer weather and amazing landscapes, captured by Colton’s articulate ‘eye’. (Be sure to check out Colton’s stunning images).

In true gypsy fashion, the laidback campers decided on their daily destination by logic and whimsy – remaining daylight, campground proximity and literally laying their bodies wherever their hats landed.

Driving east from Salt Lake for five hours saw Colton and Ellyx arrive at Factory Butte in central Utah. The desolate and crumbling landscape bears jewel-toned sediment in azure blue, regal purple and tawny gold. Downpours within the butte instantly transform the dirt road into an impermeable mud pit, even for the hardiest of four-wheel drives, so be sure to keep a watchful eye on the weather. (Muve’s intrepid four-wheel driving enthusiasts, Matt and Cody would disagree, but they actually revel in the challenge of being caught between a literal rock and a hard place!) The first sunset of the five-day adventure set the precedent, with wispy clouds casting vibrant bursts of yellow and orange onto the desert floor.

On days two and three, C and E continued on, driving south for five hours to Vegas’ outskirts to experience the Valley of Fire. Venturing through the center of Capital Reef from the butte to the VoF is particularly scenic, and often induces involuntary ‘ooohing’ and ‘aaaahing’. As the name suggests, the Valley of Fire is dramatic with extraordinary rock formations in vivid colors of pink, orange, red and yellow. Colton and Ellyx deftly covered much ground during their overnighter, scaling Fire Wave, Pink Canyon, Rainbow Vista and the White Domes trail. (Note: It’s best to book a camping plot ahead of time, as the VoF’s two campgrounds are popular. SO much so that both sites were full upon arrival, so our happy campers resorted to pitching on BLM land, just outside of the park. Local and State land laws do vary, but BLM land outside of the VoF is free to all. Simply decide on your campsite, and set-up base!)

Day four rolled around quicker than anticipated, so the pair embarked on a two and half-hour drive to arrive mid-afternoon at the crown jewel – Zion National Park. Hurriedly setting up ‘camp’, they boarded the shuttle to one of the most iconic and widely photographed summits in the world – Angel’s Landing. This three-hour climb isn’t for the faint of heart or mind, with its precarious path, chain-link guidance rope and sheer drops (1000 feet) either side. Mental agility is just as important in this ascent as physical preparedness, but worth every hair-rising step to reach the summit and exult in the wondrous 360-degree views of a surreal landscape.

Three hours came and went as Colton and Ellyx scaled Angel’s Landing and returned to more level and stable ground. Twilight – the most magical hour of every day, then set in, providing just enough light to bask in the incredible ethereal panorama of Watchman Tower at sunset. (Note: forget Disney’s three-park adventure deals. Instead, nix the crowds and sugar overload by heading north from Zion to what we dub the ‘National Park Triple Threat’. Just outside of Zion is Kolob Canyon – a miniature version of Zion, with Bryce and Canyon land very close by. Mickey who?)

Rising early on day five, the venturesome pair packed up camp for the final time, before embarking on the five-hour drive back to Salt Lake City – calmer and more content than when they left. Being at one with nature has a tendency to do so.

In terms of difficulty, all of the hikes were moderate, and very ‘do-able’ for most, apart from the aptly named Angels’ Landing. (Where lithe and nimble angels gather).

Living in Salt Lake City or Utah’s broader counties is truly a gift, with natural beauty and splendor at every turn. So start planning your next adventure. Call the Muve Group on 801.474.2274 to view our current available listings, or learn more about our upcoming developments. 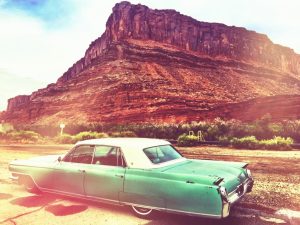