What is the first thing you think when you see this graph?

This is what comes to my mind: the market is hot, hot, hot. So hot, that I am personally wondering when it’s going to stop. I am the type of person that usually doesn’t like to follow the pack. When I see the graph jump like this I take a step back and think twice. Don’t get me wrong, we will still be buying about one investment property every 3 weeks or so, but I’m being extra cautious about what we buy.

That being said, what does all this mean to you? Well, for one, it means if you were stuck in your property because you were upside down, then you may want to contact me and get an updated valuation on your property. You may be able to sell your home now and not have to come to the table with cash. If you have wanted to sell for a while, but aren’t sure if you should, then it is time to seriously give it some thought again. I could shed some light on the situation for you over coffee or a sandwich. 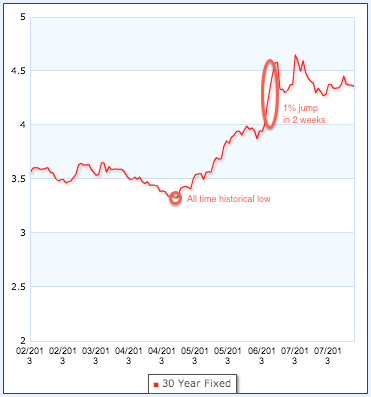 If you haven’t noticed, interest rates are on the rise, as you can see in the graph above. Rates are just as big of deal as prices. Why? Well, because American’s live their life off monthly payments. For instance, let’s just say you are buying a home for $250,000 (Salt Lake County Median Price from the first graph) at a 4% interest rate. Since today’s rate is hovering around 4%, your payment, roughly calculated, would be $1,193, in this scenario. Let’s say you wait a month to buy and this same home and it costs you $260,000, a $10,000 increase in price. Your monthly payment would go up to roughly $1,241, or an increase of $48. Now, let’s say you are buying that same $250,000 house and you were able to put it under contract quickly, but you wait until the week before closing to lock in your rate, assuming rates would go down. However, they went up .25%, which rates can easily do. For example, we saw this happen in June when rates jumped a full point in a two-week period. If this happens, and your rate went from 4% to 4.25%, on a $250,000 house that would make your payment go from $1,193 to $1,229, which is a $36 raise in payment. That being said, you should be as concerned with rates as you are with prices.

For you buyers out there it’s a tough call. No one can truly predict where the market is going to top out or even if it will soon. But, if you just take the facts that we know today, then buying is not a bad idea right now. The graph above may look scary at first glance, but lets look at a few things to ease your mind. 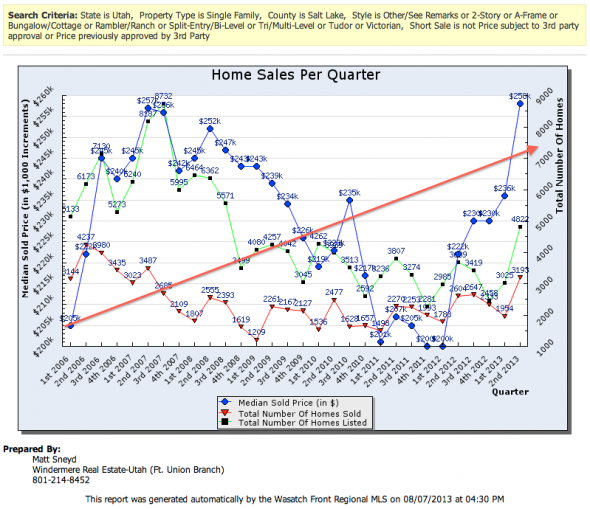 Check out the graph now that I added a line that shows what it would look like if we had a slow, steady, healthy market. Basically, it is the one we wish we had if we lived a fairytale. Now, our current median price doesn’t look so scary, does it? Not only, are we just slightly above where we should be in a healthy market, but we have much stronger and healthier buyers than we did back in 2006 and 2007. People can actually afford the houses they are buying, meaning, we are much more likely to continue to grow a healthy market. Plus, Utah has had one of the best economic environments in the country for the past few years.

If you’ve been living under a rock then you wouldn’t know about how much Forbes loves us. They named Utah #1 best state for business, #4 in labor supply, #6 in regulatory environment, #6 in economic climate, #9 in growth prospects, #12 in business costs, and #15 in quality of life (however if you look at some of the states that beat us out you’d probably agree with my thinking that that is a bunch of crap). If that wasn’t enough, there’s also the fact that Goldman Sachs made a huge move to Utah. Adobe opened a sick new office in Lehi that brought over 1,000 new jobs alone. eBay has now officially named its Draper office as it’s headquarters, and last but not least, the number of movies that are filmed in Utah is pretty crazy. Cool fact for the day that you may not know is there is a possibility of a major movie studio in Park City). To sum up, I think our buying environment and economy are much healthier than they have been the last couple years. We have seen prices continually climb in Utah, however, not as fast as they have this past year.

Here are some national stats for you. Loan applications for homebuyers, viewed as a good indicator of future home sales, grew 0.7% for the week ending Aug. 2. Mortgage applications for home purchases have fallen four out of the past five weeks, according to the Mortgage Banker’s Association. The unemployment rate is at 7.4% with 11.5 million Americans unemployed. Additionally, there were 2.4 million people marginally attached to the labor pool, who while not in the labor force, were not considered unemployed by the bureau because they had worked sometime in the past 12 months. Of that figure, 988,000 people were considered “discouraged,” which meant they had stopped looking for work. Basically, the government wants to fudge the numbers to make things seem a lot better than they actually are, we know that. However, that being said, things are slowly, but steadily, improving on a national level.

Now for a tip no one else is going to tell you. There is something happening behind the scenes here in Utah that not many people know about. There are two large national companies that have recently (within the last year) moved to Utah and they are buying up homes like crazy. How crazy? Well, one company has bought over 650 homes since Jan ’13, and they are backed by a multibillion (the billion with a B) dollar fund. Basically, they can’t run out of money. Their business plan is simple, yet genius. However, I don’t agree with it because it messes with the free market. Basically what they do is, come in and buy as many rental properties as possible. They plan to hold them for 5-10 years and ride the appreciation up. They identified Utah as a market that will have good appreciation over the next 5 years, which is why they have started buying here. So why don’t I agree with this? Well, when a company comes in and starts buying properties for higher prices than they should, they drive prices up. They are also holding many of these properties, which would have otherwise come onto the open market and been added to inventory, which drives inventory down. On top of that, demand is still high and with all these factors thrown into the mix you get rapid appreciation. Not natural appreciation. In a way, these companies are artificially driving prices up, which guarantees their success; as they are purely renting these properties based on the hope that values appreciate. Not very cool, in my opinion. These are the same types of tricks that cause Wall Street to crash. Is it illegal? No. But that doesn’t make it ok. Should this scare you? No. But you should be aware of this and make decisions wisely taking this into consideration. 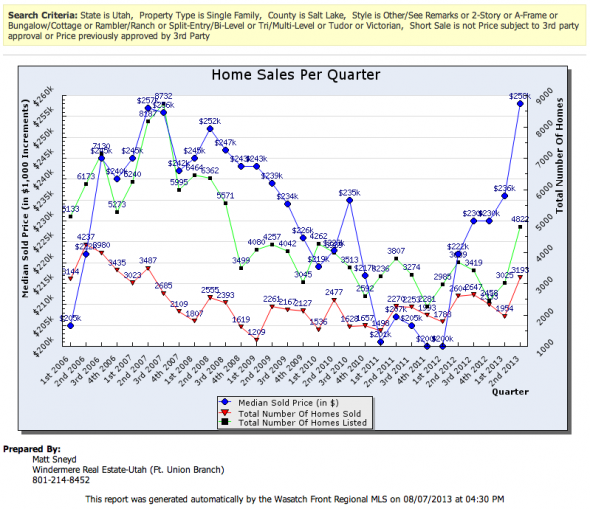 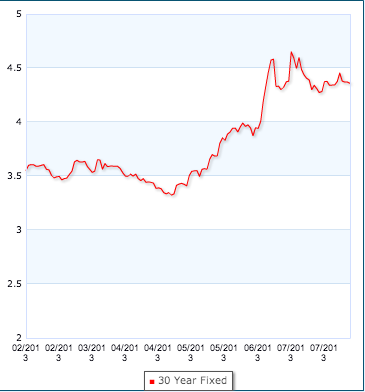 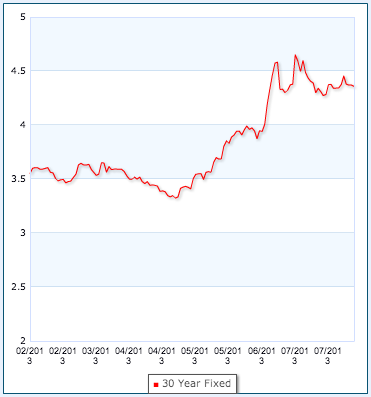